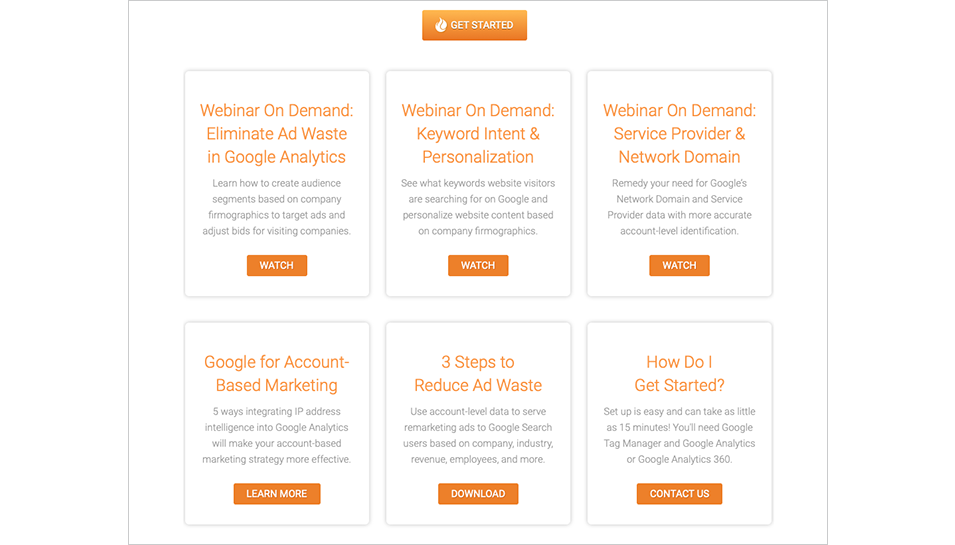 You don’t want to overwhelm your prospects by giving them too many CTAs to choose from. Decision paralysis can occur when too many options are presented and the prospect can’t decide which action to take, so they take no action. Consider reviewing your pages and limiting or minimizing the prominence of less important CTAs, which will help showcase your most important CTAs.

Reflect on what the goal of the page is

First, decide which CTAs are most important. When prospects arrive on the page, what action or actions do you most want them to take? What’s the objective or purpose of the page? The CTAs that support the page’s primary objective are your key CTAs.

You want to prominently feature your key CTAs and make them stand out.

If there are too many prominent CTAs, the key CTAs get lost among the various options. This is especially true if all of the CTAs have similar designs and contrast.

An older version KickFire’s homepage had 4 CTAs prominently featured above the fold. Not only did they all look the same, but the non-key CTAs were “larger” than the key CTA due to the length of the text.

As it turns out, the buttons were superfluous as the entire card for each solution was the actionable link.

Throughout the site, this theme persists, where the volume of prominent CTAs and the lack of contrast could make the key CTA get lost in the crowd. On a different page (below), eight CTAs with almost no discernible design differences are showcased with nearly equal prominence. Which CTA should prospects click?

Limit the number of non-key CTAs

Depending on how much importance you place on them, your first option is to simply remove a number of non-key CTAs from the page. You might also move them to another location:

Minimize the prominence of non-key CTAs

If the non-key CTAs are still important enough to keep on the page, the next best option is to make them less prominent.

In this updated version of KickFire’s homepage, they’ve changed some of the non-Key CTAs to be a darker gray. While still more prominent than hyperlinked text, the “Book A Demo” CTA is clearly what stands out against the other elements of the page. This is more successful than the previous iteration of their homepage in drawing the focus into the right CTAs.

Example: KickFire, hyperlinks instead of buttons

In this illustrative example, we remove the buttons and replace them with hyperlinks. At a glance, the two key CTAs (which both point to the same place) are the most prominent items on the page now.